Chen Qiufan is an award-winning science fiction writer. He grew up near Guiyu, China, home to the world’s largest e-waste recycling centre, an area the UN called an “environmental calamity.” His experiences there inspired his novel Waste Tide (translated into English by Ken Liu), and recently published by Head of Zeus in the UK. He currently lives in Shanghai and Beijing and works as the founder of Thema Mundi Studio. 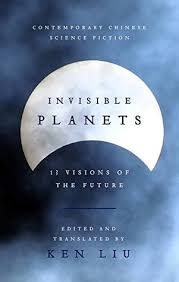 We continue our science fiction focus with another of the fantastic speakers from our genre fiction symposium in October. Our story is ‘Year of the Rat’ (鼠年), translated into English by Ken Liu, first published in translation in Fantasy and Science Fiction, August 2013, and reprinted in Invisible Planets (Head of Zeus, 2016, edited and translated by Ken Liu). You can read the original Chinese here (first published in Science Fiction World 科幻世界, 2009) and the translation here.

There’s an interview here from F&SF where Chen talks more about the story.

‘Writing is a bit like doing a jigsaw puzzle. Your brain takes bits and pieces of the information you encounter during daily life and rearranges them, edits and shapes them, forms them into a new picture. I’m guessing that my inspiration came from the news and the experiences of those around me. Ever since the Chinese education system acquired a business-oriented focus, colleges minted millions of new graduates every year. But due to the weak economy, many couldn’t find jobs. I encountered these young men and women, feeling adrift, in my life often. I wanted to write something for them because few pieces of fiction portrayed the lives of unemployed, new college graduates.’ Chen’s novel Waste Tide (translated by Ken Liu) has recently been published by Head of Zeus in the UK, and we were delighted to hear him talk about his inspirations at our latest symposium.

You can find out more in this interview for the Translated Chinese Fiction Podcast, whose creator, Angus Stewart, was also part of our symposium.

And there’s an interesting review of the novel on the MCLC website, by Cara Healey, whose research focuses on science fiction in China.

Chen’s novel will appeal to a wide audience. Science fiction fans will enjoy Chen’s thoughtful take on cyberpunk. Fans of Liu Cixin will be impressed by Chen’s broad-ranging knowledge and his technical but readable scientific explanations, as well as his nuanced portrayal of people from vastly different backgrounds forced to confront a complex problem. Scholars of Chinese literature will appreciate the references to Tang literati and the reinterpretation of May Fourth tropes, not to mention the way that Waste Tide expands our understanding of Chinese realism. Environmentalists will appreciate the novel’s visceral and affective take on humanity’s responsibilities to the planet.