Born in 1986 in Shandong province, Sun Yisheng has done a variety of jobs since graduating in chemistry – security guard at a cement factory, waiter, factory operator, technician in pesticides factory. He has had short stories published several mainstream literary journals. He sent ‘Periscope’ to Chutzpah’s founder and editor, Ou Ning, on spec, and it appeared in issue 7 of this independent Chinese magazine (spring 2012). Sun Yisheng featured as one of three young writers at a Chutzpah “Literary New Blood” event in Beijing on 9th September 2012. He has had short stories published in several mainstream literary journals and now edits an online journal. 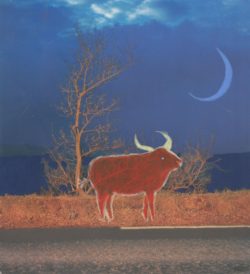 Our January book club story, ‘The Stone Ox That Grazed’ 牛得草, was originally published in Asymptote, translated by Nicky Harman. Thank you to both for the permission to reprint it! And you can also read Nicky’s note on the translation here.

If you’re interested in more of Sun Yisheng’s work, his story ‘The Shades who Periscope Through Flowers to the Sky’, also translated by Nicky, was published in Words Without Borders. ‘The Flame’ has been translated by Dave Haysom, and can be read on his website here, where you can also find more of these gorgeous illustrations by artist and designer Isobel Haysom.